Buy a product and check it in your own time, at home.
You can return the product without providing a reason within 30 days.
Show details
30 days to withdraw from the contract
Your satisfaction is very important to us, therefore you can make a return without providing a reason within 30 days.
No stress and worry
Thanks to the integration with cheap returns you can purchase without stress and be sure that the return process will be hassle free.
Easy returns wizard
All returns processed by our shop are managed in a easy-to-use returns wizard which gives you the ability to send a return parcel. 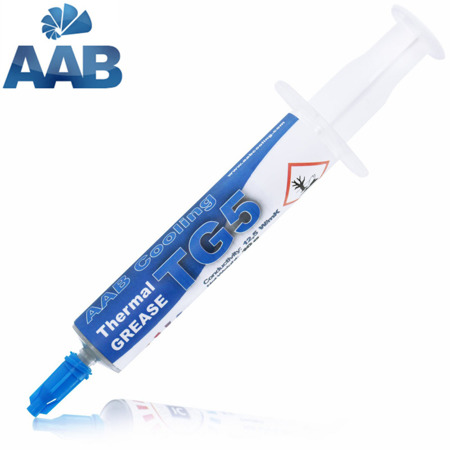 AAB CoolingThermal Grease 5- 10g is an extremely efficient thermal-conductive paste with a conductivity of as much as 12,5 W / mK. The modern formula was developed using Carbon-Nano technology, which incorporates a unique composition of metal oxide compounds that is six times better conductive than copper. Combined with CNT technology (carbon nanostructures several times stronger than steel), the modern TG 5 compound has been designed to provide the most stable performance of innovative Intel, AMD, nVidia and other electronic circuits. The ultra-modern formula TG 5 does not conduct electricity, so there is not even the slightest risk of electrical fault. Ideally fills the connections and the micro gap between the processor and the base of the cooling system (heatsink). High quality ensures stable operation without compromising thermal performance. The paste should be distributed very thinly for the best conductivity.

- It does not dry out or effuse

- Easy to use and remove

- Stable operation without deterioration of conductivity over time

- High thermal conductivity guarantees top performance.
- A modern formula that incorporates Nano-Carbon CNT technology.
- A base of modern metal oxide compounds.
- Several times higher conductivity than copper.
- Proper density and viscosity ensure accurate placement during pressure.
- Dense consistency - does not dry, does not effuse.
- Stable operation without compromising conductivity over time.
- Simple application – you should distribute a very thin layer.
- Does not conduct electric current - does not cause short circuit on very sensitive electronic circuits.
- Wide working range from -250 to 350 degrees C

Galery
Tech specs
Users reviews
To rate this product or to add a new review, you need to log in.

24 months warranty - Warranty is granted by the seller for a period of 24 months.